This week we were lucky to have Pittsburgh based artist John Pena as a visiting artist.

Lately, Pena has become most known for his daily autobiographical comic “Daily Geology“.

The actual drawings look COMPLETELY different from the way they appear online. Like the above drawing, there are notes about the drawing or its text in the borders which speak to the challenges of this entire project. 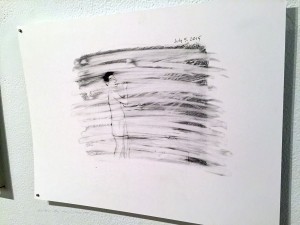 These are my favorite. When it seems like the process of doing a daily drawing is too much, but John has to produce SOMETHING. His willingness to show these is why I love artists who work in such ways. It would be easy to categorize this as a failure, but it could just as easily be seen as a challenge to our traditional notions of drawing. I can’t help but think about Gary Simmons when I see this.

From the series Green Chalkboards

This talk balloon sculpture is from his installation at the Mattress Factory this year, which was an amazing installation.

John gave a fantastic talk to our students on Thursday. It was funny and honest, just like his comics. I really admire artists like John, who are willing to try all kinds of things and at the same time can be dedicated to a singular project.

“It is my pleasure to introduce today’s visiting artist John Pena. John lives and works in Pittsburgh and received his MFA from Carnegie Mellon University in 2008. In a very short amount of time, John has garnered a national reputation for himself, being asked to attend residencies at Skowhegan and at The Bemis Center, he has received a Fullbright Fellowship, and has shown his work all over the country, most recently at the Mattress Factory. While his accomplishments are quite impressive, I would like to take a minute to explain why I think it is exciting to have John here today.

In my opinion, John is a representation of the quintessential 21st century artist. His work is not bound to any medium or image. In fact when you are introduced to his work, you may meet multiple John Penas. And it can be a little confusing, like it was a few years ago for me when different people started telling me about his work. John Pena is the artist who draws an autobiographical comic everyday, or he is the artist who writes letters to the ocean, or the artist who created a low wattage radio station that plays bird calls, or who takes videos of himself racing clouds. I needed multiple trips to his website to confirm that yes indeed, these are all the same guy…

While on the surface these works may not seem related, I like to think three things link them all: absurdity, discipline, and sincerity.

Absurdity: In his “Daily Geology” project, featured in the exhibition upstairs, John attempts to sum up an entire day’s experiences in one drawing, and by doing so he is taking the tradition of autobiographical comics to an absurd level.

Discipline: It takes discipline to go through the process of choosing a single moment at the end of the day, then figuring out how to draw that moment and its characters, and then giving every drawing a summation, and then going through that process everyday for six straight years.

And sincerity: it takes sincerity, to be brutally honest in each day’s depictions, which point out the complexity and poignancy of one’s life, his hopes, successes, struggles, and fears.

I think you can see evidence of all of this in each work John makes, not just his daily drawings…

John’s ideas and his courage to follow through are his most important artistic tools, they trump any material used to physically make his work. And that is why I am excited to introduce John Pena today.”