Below is the print I created for the portfolio exchange/exhibition titled “Flash Gordon”, celebrating the film version of the cartoon released in 1980.

The portfolio was organized by Pittsburgh based printmaker Gene Marsh. The exhibition version will be shown at Judson College in Alabama. The image was taken from a Flash Gordon comic strip published in the 1930’s. 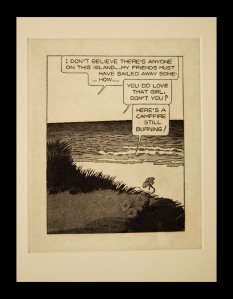